This year the Hyper Japan took place in Earl’s Court 1 which had a huge amount of space in it however it might have had a bit too much. The event itself was bigger than last year’s one at Earl’s Court 2 but it still felt like it was too small of an event in too large of a venue. Spacing aside there was a wide variety of activities going on including talks on Japanese culture, live cooking shows with free food given to the audience and the chance to sing with Wii Karaoke U.

The Sake experience this year didn’t have as many types of sake to try as last year however there was a lot more variety with what was available. Some that stood out to me included the Funaguchi Kikusui,  Sho Chiku Bai Shirakabegura MIO sparkling sake and the Gekkeikan Yuzu Nigori. There was free cheddar cheese and crackers to help pace the alcoholic content that comes with 25 shots of sake in a short time-span. 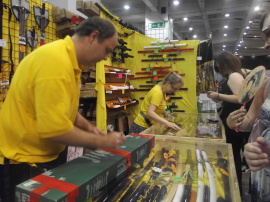 There were plenty of other stands at Hyper Japan not related to food or drink including a place where you can buy replica swords (although you are forbidden to open the packaging until you get home), a school offering you the chance to write your own message on a fan in Japanese and a plethora of merchandise from cute plush toys of burgers to art books from Studio Ghibli. 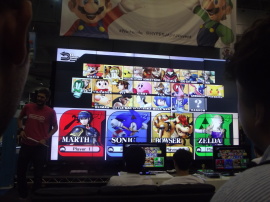 Another highlight was the Nintendo section where people could play demos of Monster Hunter 4, Captain Toad Treasure Tracker, Bayonetta 2, Hyrule Warriors, Tomadachi Life and if you were lucky enough to win your round in the 3DS Smash Bros (which I didn’t) you could play it on the Wii U in on the big screen in front of a cheering audience.

While it was certainly a great event which I recommend to anyone who is even remotely interested in Japanese culture I don’t think it lived up to the hype, it certainly is in the same category as Comic Con it still felt like it should have made a lot more use of the space at Excel 1 like Eurogamer did. 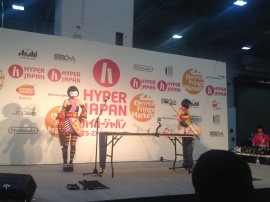