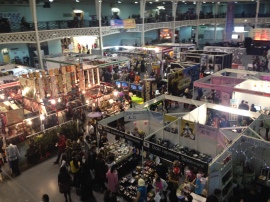 Due to the ever rising popularity of Hyper Japan for the first time there have been 2 events this year, the usual one during the Summer and now a Christmas Market which was held at Olympia. Last time I mentioned how disappointing Hyper Japan was as it was a medium sized event trying to expand in to a large sized venue which resulted in lots of leftover space and wide walkways, this year they corrected that problem by using a smaller venue and spreading the event over 2 floors. 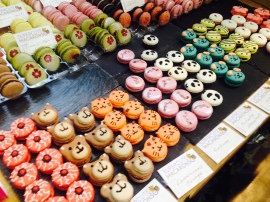 If you’re going to an event like Hyper Japan you pretty much have to try the Japanese food despite how expensive it is, this time there were more food stands than ever including instant miso soup dispensers, green tea flavoured ice cream macarons and of course the usual street food favourites takoyaki, karaage, gyoza. 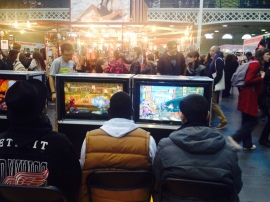 After eating your fill there were plenty of video games to play including Mario Kart 64, Street Fighter with the arcade stick and Dance Dance Revolution. While I may not be a good dancer there were plenty of other games (primarily retro) to play and even if you come alone you will definitely find someone who’ll be your player 2. 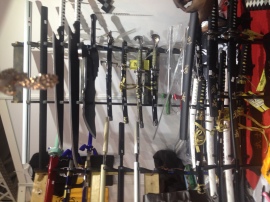 There were plenty of stalls selling Japanese products from replica swords and pocket fans to pokemon cards and kimonos. While the quantity was not as large as any previous Hyper Japan it catered to the vast majority of people at the show. When you’re not attempting to succeed at Kendama (Japanese ball and cup game) or almost being fooled by the hyper-realistic Japanese food there are constant performances on stage from musicians, chefs and artists showing their craft for the public to see. 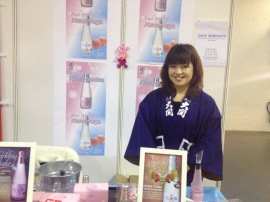 Even the Sake Experience makes a small return with a grand total of 3 stands where you can taste a variety of sakes. As expected the Hyper Japan Christmas Market was nowhere near the scale of the usual events in the summer but for what it is it’s enough to satisfy people.That being said I don’t think the Hyper Japan Christmas Market should charge the same amount to get in as its predecessor (£12). Not everyone wants a huge venue where it would take a huge amount of time and energy to see everything instead Hyper Japan condensed everything that makes its events in to a more bite sized experience.