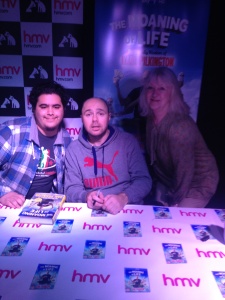 Friday 13th is supposed to be the most unlucky date that can occur although that wasn’t the case for me as I finally got to meet someone i’ve wanted to meet for ages, Karl Pilkington. Karl was doing a book signing in HMV Oxford Circus so I went with my mum and waited in a surprisingly short line until we were told to go upstairs to a hidden room in HMV and saw just how big the real queue was, we must have waited for at least 3 hours but it was worth it in the end. 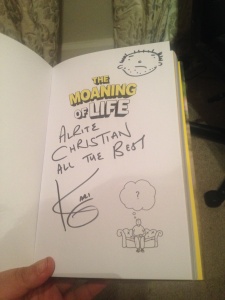 The only other person I have met at a book signing is Michael McIntyre when he brought out his auto-biography and I didn’t even get to properly meet him I was told to hand my book to someone who would then pass it to Michael who would pass it to someone else who would pass it to me. With Karl each person got at least a minute to talk to him, shake his hand, squeeze his head (yes apparently some people actually did that) and that is why it took so long to see 300 people. If I had more time I would’ve told him something I wish I had told him (It’s about design) but I guess that can wait until next time.