As a recent graduate from Ravensbourne I thought it would be suitable to go to the London Graduate Fair being held at the Business Design Centre. As I thought it was heavily based on marketing, business and technology (programming) so the majority of it wasn’t really for me however I did find quite a few interesting place to apply for including a 3 month placement in New York with Mountbatten. 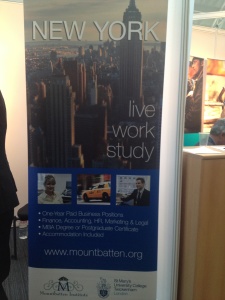 I also found quite a few job boards like Milkround, Prospects and Grads in to Careers to check in the future so it wasn’t a complete loss. It seems the majority of design placements and jobs are where I thought they were, in agencies. Companies usually go to agencies to get work done instead of forming an in-house team which is a real shame in some regards but when I working for Barclay’s I noticed they do have an in-house design team as well as collaborating with an outside agency. The point is while I may not have found much I at least have confirmed for myself where not to look.