Pick Me Up is a 12 day graphic arts festival that is held every year at Somerset House. The first piece I saw was by someone named Edward Carvalho-Monaghan whom I had met at a tech talk at Technology Will Save Us and saw him produce the Bat Macumba print. 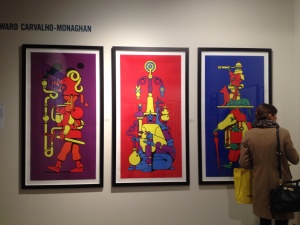 There were a large variety of illustration styles ranging from the psychedelic and flat to the highly detailed and pencil drawn. Upstairs there was a large space for studios to show off and sell their work as well as a music room, screen printing classes and the opportunity to have your portrait done by a mystery illustrator which I decided to do. 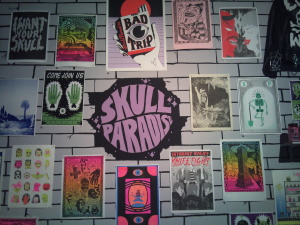 Although I didn’t get involved in it there were nightly events which included talks, lectures guests on the Pick Me Up twitter account answering questions. I also got a chance to play a game which was produced by UsTwo called Monument Valley and inspired by the M.C Esher style architecture although the highlight of the whole festival has to be the staring contests, thumb wars and arm wrestling contests going on. Another great festival which I hope to cover as press next year.